Mother of God similar to fire, ignite my heart in prayer…

Lit from within, let my heart become a sanctuary for the weary traveler, until this long night lifts and dawn unfolds her new radiance.

We are currently observing the sacred time that our Christian tradition refers to as Eastertide, the period between the celebration of Christ’s resurrection at Easter and the descent of the Holy Spirit at Pentecost (Whitsunday.)  The story of Holy Week – Christ’s journey through the darkness of betrayal and crucifixion to the light of resurrection – is so profound and has the potential to transform us so deeply that we cannot begin to assimilate it in one single week.  We would like to share some of our Eastertide reflections with you, as our experience of Holy Week this year expanded far beyond the traditional Christian story and connected us with others around the world.

This year we embarked upon the journey through Holy Week in a new way, as we participated in a virtual retreat, offered through Northeast Wisdom and led by Bill Redfield.*  This was a powerful experience of personal inner work that was augmented by the interconnected energy of the virtual wisdom community.  We also went on a physical retreat to the Appalachian mountains of North Carolina, where we were able to immerse ourselves in the sacred story of Christ as well as the sacred story of Creation.  We felt the vast, primal power of these ancient mountains that flowed in undulating peaks to the far horizon reflected the power of the Mystery of the death and resurrection of Jesus Christ.

In the afternoon of our first day, however, our inner focus was interrupted by the horrific news that Notre Dame Cathedral in Paris was burning.  In our solitude we joined with millions around the world in our shock and grief as the devastating fire continued to burn, destroying the sacred heritage of 800 years.  We thought about the Scripture reading that had begun our retreat that morning:

From on high God sent fire; it went deep into my bones; He spread a net for my feet; He turned me back; He has left me stunned, faint all day.

Although it is clearly not our belief that God sent the fire that burned Notre Dame, as we saw the images of the fire burning the cathedral “on high,” the feeling tone of this passage resonated deeply with us – “stunned” and “faint all day.”

The next morning, sitting on the deck after witnessing the spectacular sunrise, it seemed that as we looked across the vast expanse of the Appalachian mountains whose folding mounds of rock and forest extended in all directions as far as we could see, we were also able to perceive a broader perspective of the devastating fire that destroyed so much of the cathedral.  Notre Dame of Paris is an iconic image for the city and also for the Christian religion.  It seemed to us that its burning symbolically expressed in graphic, visible form the destruction of the “icons” of Western civilization, which we are seeing everywhere in the dissolution of values and principles that have guided us for many centuries.

We later heard the news that the entire structure of the cathedral had not been destroyed.  The towers and most of the vaulting still stood, and much of the art and relics were saved.  Money was already pouring in for the rebuilding.  Perhaps this is a broader symbol for what is happening in our world today: just as the new cathedral may be built upon the ancient structure but given new life that incorporates the knowledge and technology of our present time to make it even stronger and more sustainable, so may the destruction of much of our structure of core values of Western civilization be the condition that is necessary for the new structure to arise, built on the riches of the past but incorporating the wisdom that is emerging in our own time.

It seems significant that it is the roof and the spire that need to be rebuilt – symbolizing transcendence.  Perhaps a new view of “transcendence” is essential to the rebuilding of our civilization?  The Christian religion in the past has imaged the spiritual life as an ascent to God, as symbolized by the spire of the cathedral that points away from Earth toward Heaven.  The name given to the spire of Notre Dame – “la fleche,” the “arrow” that points the way to Heaven above – reflects the aspiration to leave ordinary, human life to enter the rarefied heights of “spiritual” life.  Today the critical need is to descend once again to Earth, to recognize transcendence through the immanence of divine life in all of creation.  To see the presence of God not only in the Son whose death and resurrection we observe during Holy Week, but also in the birds, the flowers, the trees, the bees, the grass, the rocks, all that we could see as we gazed upon this earthly paradise from our mountain vista. 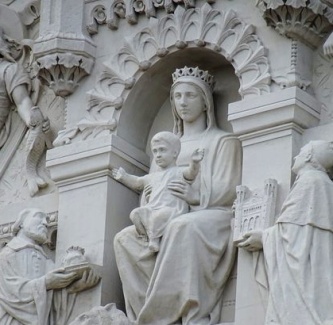 In the Middle Ages, Notre Dame – “Our Lady” – was the name given to cathedrals all over Europe that were built in honor of the Virgin Mary.  She was the human woman who gave birth to Jesus, yet as the “Mother of God” she represented the sacred feminine.  As Mother Mary gave birth to Jesus the Christ, so Mother Earth gives birth to the new life of creation.  In the fire of Notre Dame, Our Lady – Mother of God and Queen of Heaven to faithful Roman Catholics – also appears as Mother Earth and the World Soul, an archetypal symbol of the divine feminine incarnated in space-time for all of humanity. 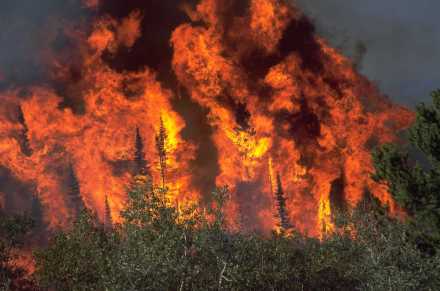 Like the cherished Notre Dame cathedral, our beloved Mother Earth is burning, and we grieve for both. The fire destroyed “the forest” of the cathedral, the traditional name for the 1200 huge 12th century oak trees that were used to construct its roof structure.  Through the tragic loss of these ancient trees we see also the destruction of the forests throughout the Earth that is taking place in our own day.  We see in the wildfires that have devastated many areas of our planet in recent times an image of Our Lady burning that for many of us is even more  powerful and heartrending than the image of Notre Dame on fire.

But our view from the mountaintop during this Holy Week brought hope as well as grief. To experience Holy Week is to learn that joy and sorrow, life and death, are inextricably bound together.  At this high mountain altitude we still saw the death of winter, even as we knew from our experience below that the new life of Spring was right around the corner.  Likewise, as we focused on the pain and suffering of the Lenten journey to the crucifixion, we knew that the resurrection would be here soon.  From this viewpoint we were able to witness the destructive burning of Notre Dame and also perceive the potential for renewed life.  Perhaps Our Lady may arise like the phoenix from the ashes, and the divine feminine in all her forms may resurrect from death to new life.

The realization of this vision for the renewed life of Our Lady requires that we move beyond the limitations of medieval consciousness that built the original cathedral, to a greatly expanded and inclusive consciousness that can meet the challenge of restoring the sacred feminine in her whole being.  It appears that Our Lady has entered the collective psyche in a dramatic fashion through our shared grief in the burning of the cathedral.  There is a truly palpable feeling of unity among people, of different cultures and religions (or none), in mourning the destruction and this energy is mobilizing for rebuilding.  Perhaps this is also an outer sign of what we are feeling inwardly, an energy that is building as humanity witnesses the destruction of our Mother Earth – the Notre Dame of the entire planet.  If we have the courage to stand firm in the face of this devastating reality and experience the depths of our collective suffering instead of seeking escape and distraction in superficial trivialities and self-centered pursuits, then perhaps the collective energy of human beings will unite to rebuild a new structure that is viable and desperately needed for our time.

As we participated in the virtual Holy Week retreat, we felt that we were part of this much larger process of planetary spiritual work that is emerging today, through which the new life will arise.  Even as we hope for the rebuilding of Notre Dame cathedral, we realize that the sacred energy of our Mother Earth will be renewed by the work that is done through the interconnected hearts of humanity.

The imperative for this collective spiritual work at this critical time in our planetary history is expressed in this beautiful passage by the Sufi mystic and teacher Llewellyn Vaughan-Lee:

As we silently work upon ourselves, the energy of our devotion becomes a point of light within the world.  At the present time a map is being unfolded made up of the lights of the lovers of God.  The purpose of this map is to change the inner energetic structure of the planet.  In previous ages this energy structure was held by sacred places, stone circles, temples, and cathedrals.  In the next stage of our collective evolution it is the hearts of individuals that will hold the cosmic note of the planet.  It is a quality of joy that is being infused into the world.  It is the heartbeat of the world and needs to be heard in our cities and towns. 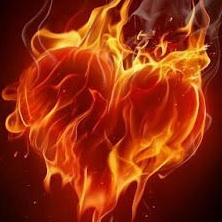 In this Great Work that humanity is now called to, we may join Marabai Starr in saying:  “Mother of God similar to fire, ignite my heart in prayer…” as we open our hearts to Our Lady of the Fire that transforms and renews all life.

Llewellyn Vaughan-Lee: The Bond with the Beloved

3 thoughts on “Our Lady of the Fire”