I have always been intrigued by an ancient practice I have heard about in which tribal peoples shared their “Big Dreams” with the community, which provided guidance and insights for the whole tribe.  These archetypal dreams arose out of the collective Soul of the people and therefore had a significance that reached far beyond the individual dreamer.  The spiritual power of the “Big Dream” was honored as an expression of wisdom for the entire community. Today, as the human race struggles to realize that our “community” has grown beyond insular tribal groups to an inclusive global community, we urgently need to reclaim this ancient practice and heed the wisdom of the World Soul that is emerging in dreams, visionary images, meditations, and intuitive artistic expressions of countless people throughout the world.  Our task as members of one world community, which celebrates the beauty of its diverse cultures and spiritual traditions, is to seek the emergent universal wisdom and honor its unique expressions throughout the world.  We must listen to the message of wisdom in whatever form it appears, and share our own “little grains of wisdom” with each other as one human race.  It is in this spirit that I offer some recent dreams and visions as one small expression of the wisdom messages that are pouring forth through so many today.  I believe that they speak to our collective condition and so you may find some resonance with your own inner experience.  I encourage you also to share your insights and inspirations since the synergistic effect created through sharing our individual “visions of wisdom” provides a powerful source of hope for our future.

For the past year I have been desperately looking for such signs of hope in the midst of what seems to be increasingly distressing and dangerous events erupting throughout the world.  In the midst of my inner turmoil I found the prayer of the 5th century monk, John Cassian, coming forth spontaneously:  “O God, come to my assistance; Lord, make haste to help me!” The personal focus shifted to the collective, however, and this became central to my fervent daily prayer for world peace, social justice, and healing of the Earth: “Lord, make haste to help us!” 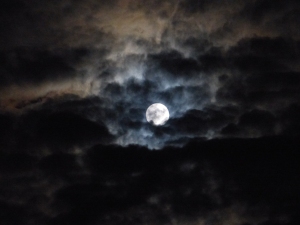 On the day before the infamous date of 9/11 of this past year, I had a very vivid dream that woke Richard up by my yelling at an “unknown intruder.”  In the dream we were watching a television program that showed interviews with people from both ends of the political spectrum, highlighting the intense polarization of views.  People were making extremely mean, disparaging comments to each other, reaching the point where they wouldn’t even talk together – unfortunately, it seemed very similar to many of our current political programs!  I was becoming increasingly disturbed and dismayed by the intense hostility, and it was then that I saw a dark figure in our closet; its back was turned and I couldn’t see any of its features, but it appeared to be looking for something or rearranging items in the closet.  I was startled and yelled, “Who are you?!” With no response, I became frightened and kept yelling, “Who are you?!  Who are you?!”  At this point a very large, tall woman came striding out of the closet, walking briskly past without looking at us.  That was when Richard woke me up because of my yelling.

I realized that the dream is obviously reflecting the extreme polarizing political tensions of our current times, but it seemed to me that it also had a deeper, collective meaning that went beyond my own personal emotional responses.  I generally begin my attempts to gain insight into the meaning of my dreams through the symbolism of Jungian psychology.  In this case the “unknown dark figure in the closet” seemed to be a classic “shadow” figure, representing the disowned, repressed aspects of our personality that we do not accept because they contradict our self image.  I could readily see the dark woman in the closet as the “shadow” figure in both my personal and the collective psyche that expresses negative thoughts and hostile feelings toward the “other.”  Her appearance forces me to look at those qualities within myself that I would rather hide in the “dark closet” of the unconscious: the polarizing attitudes that I share with the television interviewees and my negative feelings toward the “other” whose viewpoints are so different from my own.  This certainly seems to be a message that many of us need to hear today: we must transform our condemnation of others into compassion, while we continue to oppose those actions that harm other people and our planetary home.  It is the responsibility for those who are most conscious to lead the way toward healing this intense polarization, even when those who are stuck in the patterns of hatred and hostility do not respond.  For the commitment to this healing work by increasing numbers of people throughout our world community can make a tremendous difference in the collective consciousness.

As I continued to reflect on my dream experience, I realized that I was more perplexed than afraid when I first saw the unknown figure in the closet.  I wanted to know the answer to my questions:  Who are you?  And what are you doing in our closet?  But she remained a mysterious presence, a seemingly objective observer in the scene, a hidden figure that seemed to be looking for something or moving things around in the dark closet.  I sensed a strong collective element in this image, and it occurred to me that perhaps she is a “Self” figure, representing the wholeness that we so greatly need.  Perhaps she is searching in the unconscious for something that will help us to integrate the opposites that are tearing us apart, or rearranging items in the psyche that will enable us to attain the healing and wholeness that characterize “conscious humanity.”  This appeared to me to be a message of hope:  As we egoic humans focus on our polarizing differences and the fear and hatred they engender, we have a “helper” – the Self – that is within the darkness of the unconscious psyche looking for the “hidden wisdom” that will guide us to the profound transformation of consciousness that is necessary for us to live as one world community.

This meaning of the dream figure was affirmed for me the next day when I opened to this passage from the 12th century mystic, Hildegard of Bingen, in the World Wisdom Bible:

For Wisdom rules and constrains every sort of diabolical malice.  In herself and through herself alone she made all things lovingly and gently.

They can be destroyed by no enemy, because she sees most truly the beginning and end of all things.

She who fully composed all things so that all things might be ruled by her.

The synchronistic connection between Hildegard’s vision and the image in my dream was clear to me. The figure of Wisdom is “in the shadow!”  There, in the darkness, she is at work creating a greater order out of our current chaos.  Hildegard’s vision of Wisdom brings us this message of hope and faith: trust in the process that is unfolding as divine Wisdom continues the work of cosmic creation.  We cannot see the full scale of the divine creative process; we are so limited by our earthly space/time perspective that we have no sense of “deep time” through which the Divine works.  So the message to trust in the process is twofold:

I continued to ponder the message of this dream in the months that followed, and on the day before Christmas Eve I had another experience that amplified its meaning for me:  As I was waking, still in the liminal dream-space, the question arose within me:  “Who is watching over us?”  Immediately I heard inwardly: “Stella Minerva – the Angel of the Lord.”

Fully awake now, I was startled and perplexed.  Why did this question come?  It certainly wasn’t one I had been consciously thinking about.  And the answer surprised me even more: Stella Minerva?!  I knew that “Stella” referred to “Star,” and my immediate association was to “Stella Maris,” the “Star of the Sea” which is a title of the Virgin Mary.  That would have made much more sense to me!  I did remember that Minerva was a Roman goddess but knew nothing about her attributes.  So I began my investigation of this mysterious feminine figure whose presence had announced itself to me.  The first thing I found out was that she is the Roman goddess of wisdom!  So she is the Roman representation of Sophia, the divine figure of Wisdom that has been central in my spiritual life.

“Stella Minerva” – the Star of Wisdom that emanates the divine Light – is an image that complements the dream figure of the woman in the dark closet.  Here her identity is known: she is a representation of divine Wisdom, appearing in one of the many different guises by which she is known among the human race.  Her purpose is also clearly seen: she is the “Angel of the Lord” who “watches over us” – all people, all creatures and beings, and all of the Earth!

This vision of Wisdom also seems to be an answer to my continual prayer for our world, “Lord, make haste to help us!”  Stella Minerva is the Angel of the Lord, the Star of Wisdom that is even now working deeply within the collective human psyche, measuring and ordering all things; as our outer world erupts in chaos, Stella Minerva – Sophia – is the angelic guardian and protector of our Earth and all humanity.

Even as I give thanks for these messages of hope and trust, I realize how important it is for each one of us to commit ourselves to the inner as well as the outer work that is necessary for the profound transformation of human consciousness that is the future vision of Wisdom.  For this transformation of the collective psyche must be accomplished within each person. Yet this profound leap in consciousness cannot be accomplished by the “small self,” the egoic human being relying on his/her rational mind.  It requires the attainment of a nondual perspective that transcends our ordinary mental functioning.  This is why it is important to practice some form of meditation, in which our sense of identity gradually shifts from the small self to the deeper Self where divine Wisdom is to be found.  We cannot do the work of transforming consciousness by ourselves, but we can make a conscious decision to commit ourselves to a spiritual practice and open to the transformative work of Wisdom within the Soul.  This can be expressed in many ways:

This process was shown to me in another vision of Wisdom that appeared as I made my prayer for the world: “Lord, make haste to help us!”  A beautiful image arose in which I found myself looking down upon our luminous planet Earth, my hands joined with others in a huge circle of humanity surrounding the Earth.  I could see that this circle of “conscious humanity” was rapidly expanding.  Then I felt a radiant angelic presence behind me and the fiery energy of divine Love penetrated my entire being.  Angels of dazzling light appeared behind each person, forming a brilliant band of illumination.  The angelic and human energies flowed together, intertwined and enfolded the Earth in an orb of radiant Light and Love. This is the “answer” to my prayer: it is an image of a truly inclusive humanity joined together in co-creation with the Divine.  This is the source of my trust in the process of divine Wisdom that is even now working within the darkness of our current world.

3 thoughts on “Visions of Wisdom”